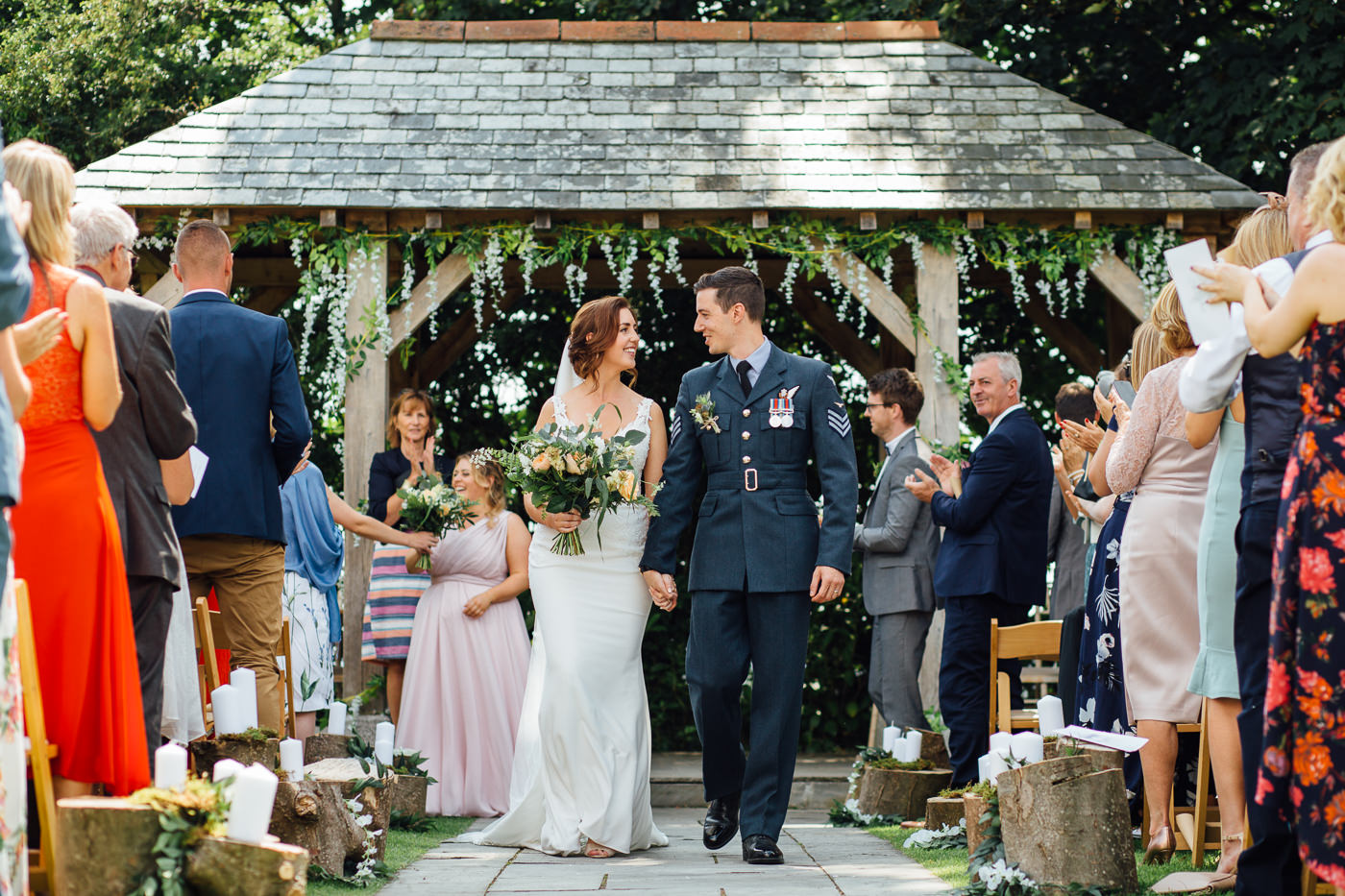 We share the lovely wedding of Lana and Tom at Trevenna Barns on the 1st August 2019 with photos captured by Megan from Heather Photography.

Where it all began

Everyone likes to think how they met was fate, but for Tom and Alannah it really might have been!

Their romance began in Bangkok, Thailand; Lana was on a girl’s holiday and Tom was there with the guys, and neither had any intentions of meeting their happy ever after.

Being the wild and adventurous traveller that Lana is the ladies went straight to an Irish bar (it probably helps here to mention that Lana is an Irish girl through and through!) and, after a number of refreshing beverages, she felt a tap on her shoulder to find a handsome young man asking her if she had a light.

She didn’t. She doesn’t smoke. But turns out that neither did Tom and after an awkward pause he confessed he had just wanted to talk to Lana!

They hit it off, but as Lana had lost her phone it was impossible to keep in contact, but as fate would have it, they bumped into each other a few weeks later on the beautiful island of Phi Phi.

Once returning to the UK they remained friends over Facebook and, after a year, Tom took the plunge and booked a flight to the emerald Isle. They met up in Lana’s hometown of Galway and never looked back!

The first step of any proposal is having a ring. Tom wanted Alannah to have a ring that was one of a kind and so enlisted the help of good friend (Laura, a very talented jewellery designer) to help create something unique. It took a long time to come up with a design that Tom was happy with, but in the end, it turned out perfect. Laura happened to be the go-to choice to design their bespoke wedding rings as well!

Choosing the time and place for the proposal wasn’t easy. Tom wanted to be engaged for Christmas as they would be seeing both of their families and friends from home; he also wanted to pick a location that had some meaning to both of them, and that was also a beautiful spot.

One of their first dates in the U.K was to Hampton Court Palace which they both loved, so he took Alannah there on a frosty November Saturday with no real idea of how or where he would propose….just hoping that the opportunity would present itself. It did. Whilst walking through the gardens they came across a picture-perfect bridge crossing a river; swans swam on either side of the bridge and deer were running through the trees in the distance.

It was perfect. Tom knelt on one knee, took the ring from his pocket, and -taking great care not to drop it into the freezing water- and asked Alannah to marry him. The answer came back, “of course!”.

The Wedding Day and Planning

The starting point for most weddings is “what sort of wedding do we want?”. The three things that were most important to them were; family, fun and the outdoors. Choosing the location was a tough one but as they had so many happy memories in Tom’s home of Cornwall they decided that it was the best place for them – plus it would give guests the feel of a summer holiday as many people were travelling to attend.

They were looking for a venue that had a rustic farmhouse feel that allowed an outdoor ceremony. In addition to that, having a large amount of rooms on site was also important as most of the bride’s family were travelling from Ireland.

With all this in mind they started viewing venues, most of which were charming converted farms but weren’t quite right. However all that changed when they arrived at Trevenna; they both fell in love with it.

As soon as they stepped into Trevenna they knew it was exactly the place they had been looking for. From booking the venue everything started to fall into place- they had their date, and so could begin booking suppliers.

They had a very DIY approach to the wedding decor. The theme was forest & rustic romance, a simple palette of earthy and blush tones with mostly white flowers and lots of greenery. Lana is an interior designer, and both of them are very creative, so the overall look & feel for their wedding was really important to them. Most of the décor was made themselves, the difficulty was staying on budget and not getting carried away! eBay, charity stores and a little elbow grease gave them a wow factor wedding without the hefty price tag.

Alannah’s favourite part were the mossy tree branches down the centre of the trestle table which they had drilled holes into for tea lights. They got the branches from the forest near their home, so it didn’t cost a penny, and they received lots of compliments on them. They both also loved the tree stumps that were lined down the aisle, and the hanging wisteria foliage that decorated the arbour. Family and friends were on hand to help set up the day and everything turned out beautiful.

For Lana the most difficult part was finding “The Dress”. Every single one that was tried was just not giving that feeling of “this is the one”. In the end Alannah bought a simple ‘off the rack’ dress, then took it to an amazing dress maker who turned it into exactly what she wanted…and it didn’t cost the earth!
The bridesmaid also didn’t make it easy to pick a design; with bridesmaids living all over the world they certainly earned themselves the title of International Bride Squad!

The dresses were ordered online from a website that did custom sizing (there was no time to get them fitted) and found that this was the perfect solution. The girls sent their measurements, as per the website requirements, and a few months later they arrived and were beautiful. There was a very funny moment as one of the dresses was about a foot too short! One bridesmaid had sent the wrong measurements! The website was wonderful however and turned around a new dress order which arrived just in the nick of time!

There was plenty of discussion about what Tom would wear; he wanted something other than a suit and tie, and being in the Royal Air Force gave him the option of wearing his uniform….but a thick woollen uniform isn’t exactly ideal on a hot summer’s day! Tom decided on his military uniform for the ceremony and a dinner jacket for the remainder of the day.

A black dinner jacket seemed too formal for a summer wedding, so he opted for a grey jacket with black trousers and bow tie. The groomsmen finished the look in two-piece suits of a matching grey.

Despite the roasting hot weather, Tom was delighted he wore his uniform for at least a small portion of the day as it had special significance for him. Tom’s Grandfather was also married in his uniform, which Tom and Lana have a lovely photograph of.

Tom and Lana first met Megan from Heather Photography at Tom’s brother’s wedding in September 2018. They had been searching for a photographer anyway and saw the way that Megan worked and really liked her style.

When Megan sent some preview pictures through after the day, they loved them so decided to take a closer look. As it turned out, they had already shortlisted her as a favourite so a couple of weeks after first meeting they booked up!

‘There is such a thing as a perfect day’

Lana – “On reflection I think we all look back and say I wish I had this or done that. I certainly did my share of it but now some time has passed I can honestly say I am delighted with how our wedding day turned out. I realised that we achieved our very first objectives of a family, fun filled, outdoor wedding.

We also lucked out with a gorgeous sunny day. We had an absolute blast and made the best memories which we will carry with us through this wonderful thing called life,”

For more information about how we use your data please refer to our privacy and cookie policies.

How to Choose your Dream Wedding Dress

How Much do Wedding Flowers Cost?

Great Choice! This Venue is now added to your Shortlist.